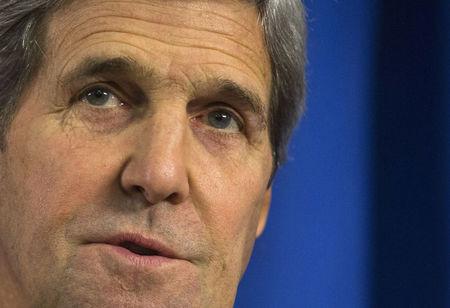 U.S. Secretary of State John Kerry and his Iranian counterpart Mohammad Javad Zarif will try to narrow gaps in another round of nuclear talks in Geneva on Sunday as they press to meet a March 31 deadline for a political framework agreement.

So why the long face John? Forget your dentures again? This Yahoo photo of Secretariat "In a Pensive Pose" is bound to become an instant classic. I have already downloaded it and using it as desktop wallpaper. Barry's boy Lurch once again trots out with his clipboard full of x & o plans that nobody can comprehend and explains away reality leaving the people in the Conference more than willing to do a reverse camel into their own asswholes leaving the room in complete darkness, just to get away from this idiot. Ole Secretariat flits around and moans, and does the occasional hand wringing, but as far as what are his accomplishments, the answer is "squat." His award as the Easter Island Head Look Alike Contest Winner does not count in the overall scheme of things. Like his predecessor Hillary, what has this buffoon accomplished? DUH?! He is a phu*king clueless idiot an that does not leave room for anything to the upside. Through Secretariat, President Barry has clearly stated that history will only remember him for just 2 things: My legacy legislation,
OB☭M☭C☭RE ● & being Vladimir Putin's B1TCH!
Secretariat has actually spent so much time in Israel twiddling his hoofs that the Israelis have become convinced that he eats his hay with Kosher ketsup. This is the same moron that stated about his Viet Nam experience, "I vividly remember my Christmas in Cambodia." but the problem is that his unit was NEVER in Cambodia. He also got 3 Purple Hearts for injuries but NEVER spent a single day in sick bay. Now, this same dikhead that told us more about, Bergdahl's "honorable service," Global Warming, & Middle East peace? It is my understanding that he travels so much so he doesn't have to be around that twit Terreesah that he is married to. But, sometimes he carries her with him just so he doesn't have to kiss her good-bye. It is also our understanding that if they had a boy child together, he would look like Big Foot Silva & if they had a girl she would look like Sea Biscuit.